‘Greek mythology had it that Zeus, father of the gods, released two eagles, one at each end of the earth, and commanded them to fly towards each other. A sacred stone, the omphalos – the navel of the world – was placed where they met, to enable communication with the divine. […] I remember gazing at my map when I first heard this tale, wondering where the eagles would have met. […] The precise position changed, depending where I placed my fingers to start measuring equal distances from east and west. But I always ended up somewhere between the Black Sea and the Himalayas.’ (p. xix)

This is what Peter Frankopan writes in the preface of his ambitious book, The Silk Roads. A new history of the world. The author’s aim is clear just from the start: to recalibrate, and to certain extent rewrite, the global history focusing on the ‘real crucible’ of the world, not Europe and the Mediterranean, but Asia, more precisely Persia. The book revolves around the connection between east and west, the silk roads, running through the spine of Asia, carrying goods, ideas, cultures, religions, people, destruction, and political turmoil. The approach embraced by the author, anyway, is purely economic: the trade of goods are throughout the book the primary forces responsible for what happened and still happens in the world. 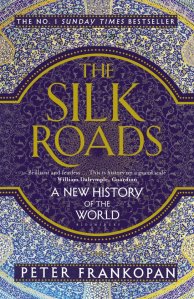 This new history of the world starts in Persia, around 336 BC, when Alexander of Macedon (‘the Great’) took the throne and set out to conquer the East. From then on, the book develops an intriguing narrative, firmly based on contemporary sources, of how the world around the Silk Roads developed. From the rise of Islam to the very first Arab coinage, the Crusades, the Black Death in Europe… The intensive research behind each event brings to light interesting facts and anecdotes, in some cases subverting the common perception of facts. For instance, we get to know the more human face of the bloodthirsty Genghis Khan and how the Mongol invasion was designed. Even more interesting, we learn that the Black Death in Europe was not the end of it: in fact, it marked the real flourishing of the old continent.

The narration of the rise of Islam, clearly influenced by Patricia Crone’s work, left me positively impressed, as did the insightful interpretation of the inscriptions in the Dome of the Rock.

Yet, the book is not 100% accurate, and big and small errors or omissions make you scratch your head. In the beautiful legend of Zeus and the two eagles, the author forgets to mention that the father of the gods actually found the center of Gaia (mother heart), and he found it in Delphi, in the middle of Greece, not on the Black Sea. Despite providing a contextualized reading of its inscriptions, the Dome of the Rock is described as a mosque (p. 89). The Crusaders never took Aleppo, and T.E. Lawrence (of Arabia) would have never been able to take Araqa without the Arab forces, which are not mentioned at all.

Starting with a chapter called ‘The Creation of the Silk Road’, and beginning with Alexander the Great hardly makes sense. The Achaemenid empire, ‘the largest the ancient world had ever seen’ (Heilbrunn ToAH), is only superficially mentioned and its rulers are taken into consideration simply as ‘enemies’. Also, the most ancient core of the Silk Roads, lying in the heart of China, during the two millennia before Christ, is totally absent.

The book is lopsided due to Frankopan’s (far too) wide approach: in some cases, connections between events are lacking, and important historical periods (such as the Enlightenment, the Renaissance and 19th-century colonialism) are discarded or simply mentioned passing by. Also, the imbalance is visible in the book structure: 14 chapters deal with the long period from Alexander the Great to the 18th century included (more than two millennia!), and other 15 deal with modern and contemporary era (19th century – today).

Also, the general perspective is challenging: the book’s aim is to subvert the Eurocentric historiography, recalibrating the center of the world, yet, the main sources used to describe those lands are European and North American, particularly when it comes to contemporary events. As Marx would say: ‘They cannot represent themselves, they must be represented’. Throughout the book, but again mainly in its second part, the basic frame is us (the West) vs them (the East). When indulging in this dichotomy the author is hyper-critical towards the ‘us-part’, but this does not make the dichotomy less present: for instance, we read phrases like ‘Europe’s distinctive character as more aggressive, more unstable and less peace-minded than other parts of the world…’ (p. 259), where the ‘other parts of the world’ are not better identified, without giving solid frames of reference or a context.

Despite some inaccuracies, omissions, and challenges, the value of Frankopan’s work cannot be underestimated. The new point of view the author uses to describe global history is brave and new. Of course, a full account of world history cannot be squeezed in 646 pages, but his attempt is clear and noteworthy. It opens the doors to new research and new themes.

As it was for Marco Polo, Ibn Battuta and Zheng He, the Silk Roads are still to be fully discovered.