The Road to Oxiana is considered Byron’s masterpiece.

In the form of a travelogue, the book is an accurate reportage of the long, exotic journey of Byron and his friend Christopher Sykes. It is extremely romantic thinking of Robert Byron, on those snowy days blocked in Qala i Now, writing the diary at length, writing down the situation of the road and his sickness. Isn’t it evocative? And the reader feels the changes in his writing due to external circumstances, even more so when he records ‘I have been reading Proust for the last three days (and begin to observe the infection of uncontrolled detail creeping into this diary)’.

In fact, the travelogue was written after the journey, and it took him three years of constant work to complete and perfect the book. As Acton reports, he labored hard ‘to obtain an effect of spontaneity’.

Thence the table of contents is titled “Entries“. And as Sykes observes: “So conscientiously is it disguised as a book of hurried entries into a diary that a reader may easily and pardonably read it too quickly, mistaking it for an amusing record of an amusing trip, and no more”. This hard work of disguise makes the book even more relevant as a stylistic experiment.

But is everything real? Is it fictionalized?

Byron is skillfully compiling the book as a real travel journal, adding different materials to it, in a collage of news clippings, public signs and notices, letters, bureaucratic documents, diary entries, dissertations in art history, essay on current politics, and dialogues. The dialogues are the most interesting parts. As Sykes explains, Byron was not simply a poor linguist, he was a very poor one: then ‘all the non-English conversations recorded in his book are invented’. He could not then communicate freely and easily as we read in many points of his journal. 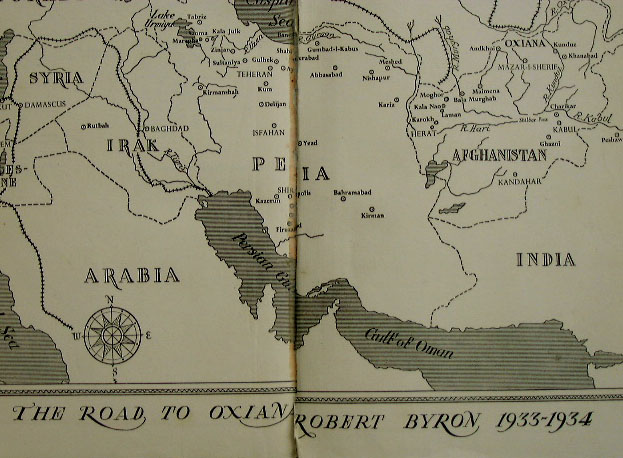 One then should read the comic discussions with locals as a stylistic experiment, as real playlets ‘of impressive finish and point’. The same can be said for the decision to use a nickname when talking and writing about the Shah of Persia:

I remarked to Christopher on the indignity of the people’s clothes: ‘Why does the Shah makes them wear those hats?’

‘Sh. You mustn’t mention the Shah out loud. Call him Mr Smith.’

‘No, that’s Stalin’s name in Russia.’

‘Jones is no good either. Hitler has to have it now that Primo de Rivera is dead. And anyhow I get confused with these ordinary names. We had better call him Marjoribanks, if we want to remember whom we mean.’

‘All right. And you had better write it too, in case they confiscate your diary.’

I shall in future.

The fact that travelogue was written after the actual journey, and that parts of it are fictionalized, still, does not need to make the reader think that the value of the book drops. On the contrary, one can see the artfulness of Robert Byron at its best and we are invited to read the ‘travelogue’ less superficially. It is the result of years of work and is a showcase of the political, cultural ideas, and the genius of Robert Byron.