On the 3rd of October, the University of Uppsala published an article that was to generate much discussion on the social media. The title of the article was pretty sensationalistic, as it claimed that the words Allah and ‘Ali were written in Square Kufic on woven bands of silk in burial costumes found in Viking Age graves. In the article, the university explained that “patterns have now proven to be geometric Kufic characters”. The discovery was attributed to Professor Annika Larsson, a researcher in textile archaeology at the Department of Archaeology and Ancient History at Uppsala University. After this article was published on the university website, newspapers around the world re-posted the news, proposing the same conclusions of the original article: the Daily Sabah, the Guardian, the BBC. In the latter, there is a quote of Professor Larsson stating “I couldn’t quite make sense of [the decorative patterns] and then I remembered where I had seen similar designs – in Spain, on Moorish textiles.”

The articles were completed by two images: one representing the decorated silk, the other a close-up on a study drawing of the pattern. 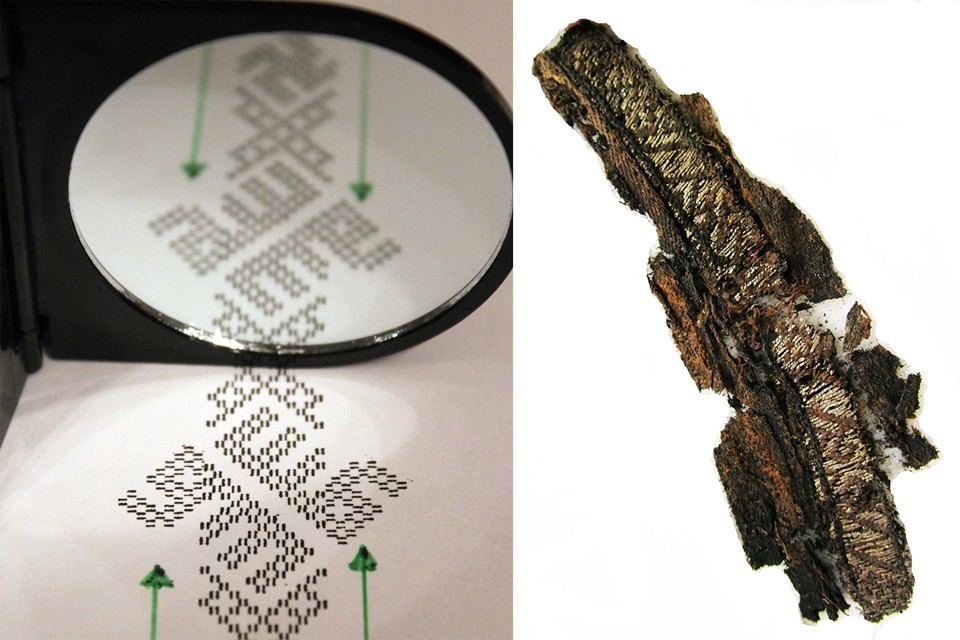 But while it is a fact that Vikings and the Muslim world had connections through trade and travel, this finding is odd.

Even if we stop here, and decide not to proceed further, many things are not making sense:

These and other concerns were raised by many scholars on twitter, and beautifully summarized in a 60-post thread by Professor Stephennie Mulder (UT Austin), that I urge everyone to check:

At the end of the day, what emerged is that the pattern of the silk band shows the following composition:

Where there is a triangle, Larsson wants to see a letter, that would extend the borders of the band. As Sigal Samuel puts it in his article for The Atlantic, the last letter (ha) “it’s part of what Larsson imagines might have existed beyond the edges of the frayed fragment we have today. Larsson is looking at the pattern that’s visible and extrapolating what may have been beyond it, as part of her attempt to reconstruct what the artifact might have looked like in full.”

After the debate, the Uppsala University website edited and amended the article, reducing the original sensationalistic tone and pointing out that these were preliminary findings, that were published without any form of peer-review or revision. This fact did of course cause a wider discussion on the role of the university in spreading ‘fake’ news, that can in a way also be used politically.

Oh yes, because even if we are talking about the history of art, and patterns, and scripts, we should never forget that history and its interpretation, is also a political act, or can be exploited as such. One of the point cleverly made by Stephennie Mulder is that in a world where white supremacists use Vikings as a symbol, “Nordic warriors defending Europe from foreign pollution”, as Paul Cobb explains, such a finding could subvert such an interpretation.

“People want to see Arabic there, because it resonates today with a dream of a more inclusive Europe.”