After roughly one month spent thinking and thinking about the Iranian tombstone tradition developed during the 12th century, I maybe have reached some results. Actually, as the material is scattered around museums and galleries, I decided to bring some of the objects together, so that it would be easier to understand the overall tradition. 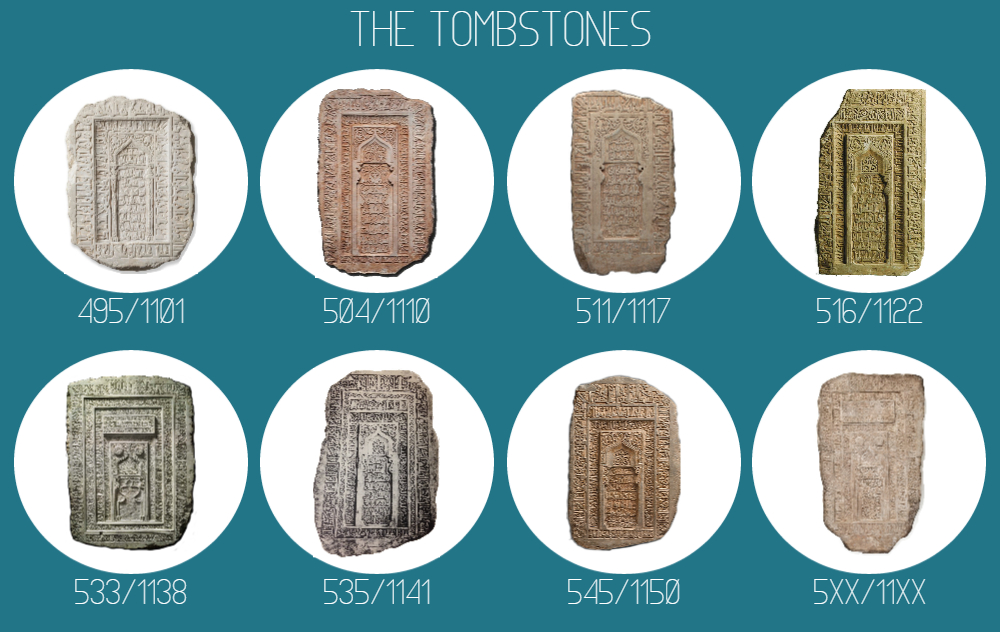 I take into consideration eight tombstones dated between 495/1101 and 545/1150. Seven of them are dated through their inscriptions, only in one case it is impossible to define the exact date of production, but thanks to the signature of the carver and its design, I believe it can be dated to the same period.

As for their geographic origin, much of them were found in Yazd, but not all of them. In particular, the tombstones dated 495/1101, and the one not clearly dated (5XX/11XX) are said, on the museums’ website, to come from Iran, without mentioning a specific place. If we group the tombstones according to their carvers is it possible that also these two come from the same province as the others. 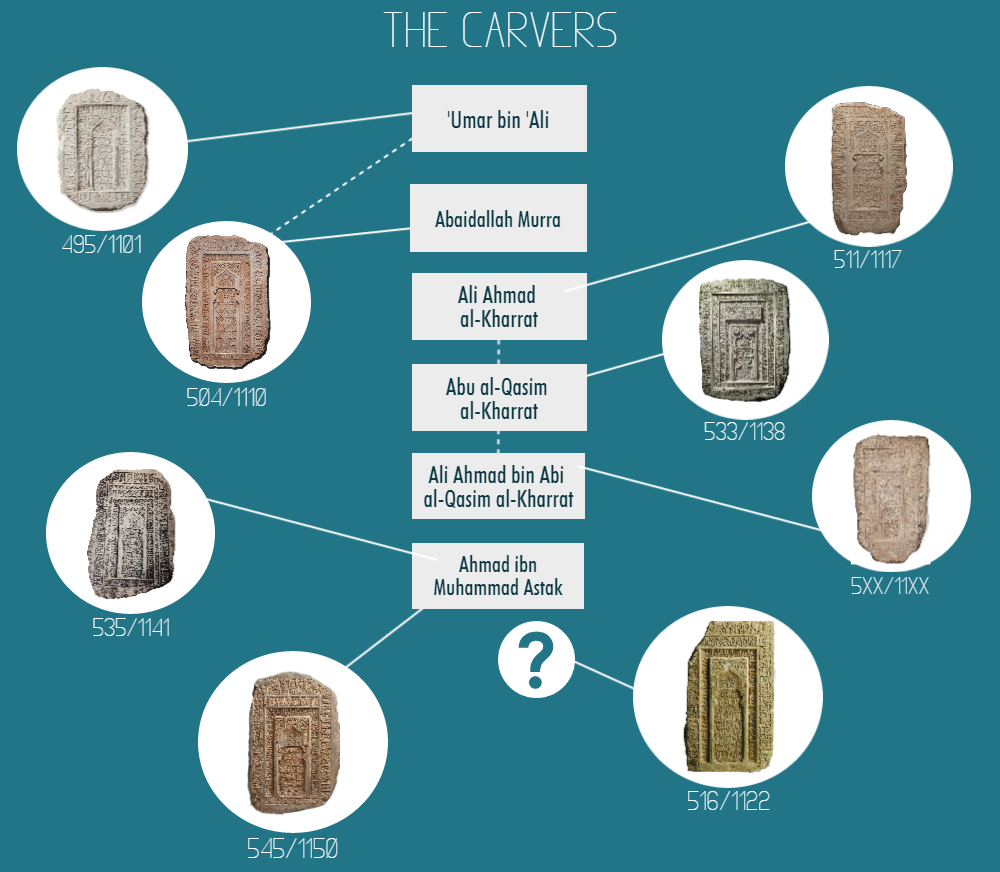 In seven of the eight slabs there is the signature of the carver(s). The tombstone dated 504/1110 is signed by both Abaidalla Murra and ‘Umar. I suppose that this ‘Umar was the same carver (‘Umar bin ‘Ali) that signed also the tombstone dated 495/1101.

The three funerary slabs dated 511/1117, 533/1138 and 5XX/11XX are signed most probably by the same carver: ‘Ali Ahmad bin Abi al-Qasim al-Kharrat, or alternatively, by three carvers belonging to the same family. I presume that the first option is the most probable. 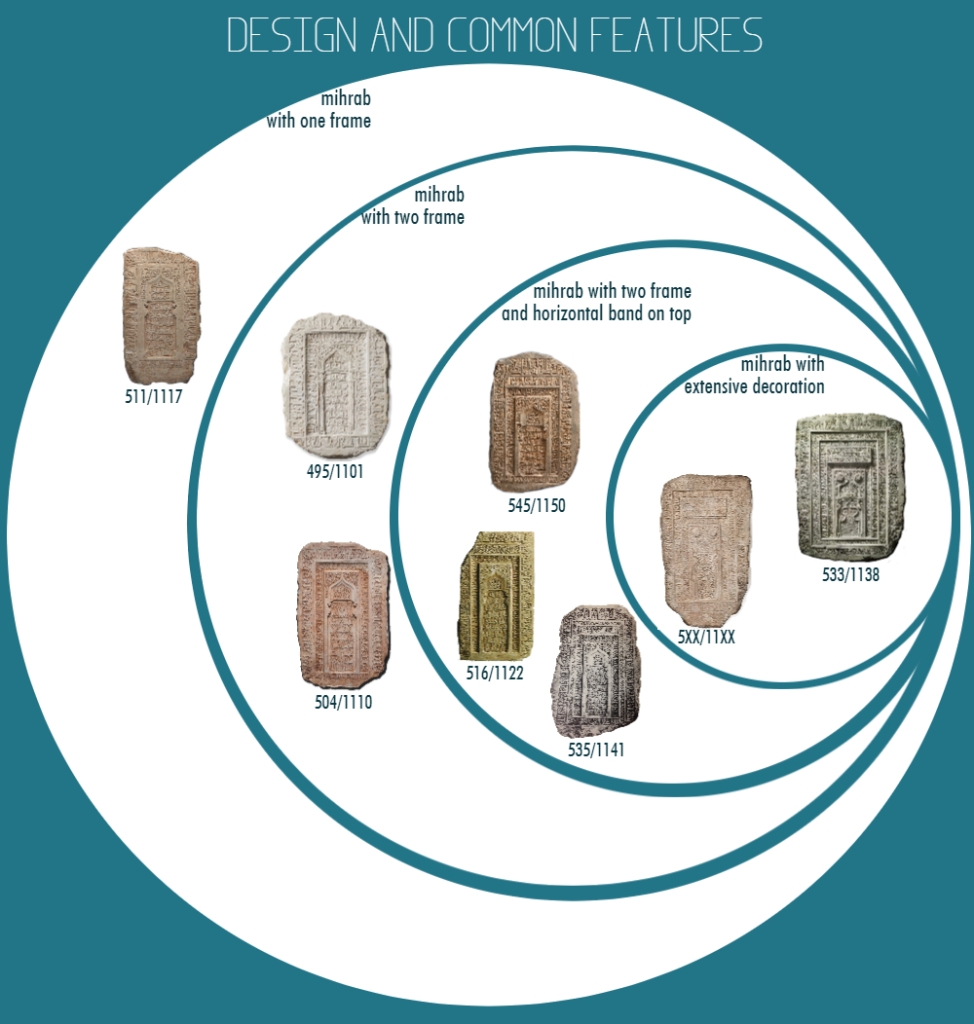 Comparing the designs of the slabs, it appears that they all belong to the same specific tradition. In particular we can suppose that the original/core design comprises a two-dimensional mihrab surrounded by one or more epigraphic frames. The design can be more or less elaborated. As the elaboration of the design does not seem to follow a chronological pattern, it is probable that the carver defined the design according to the patronage.

The decoration and the style of the slabs are strikingly similar to each other: can we maybe suppose that the carvers belonged to the same workshop? I do, but right now I do not have enough element to be sure. 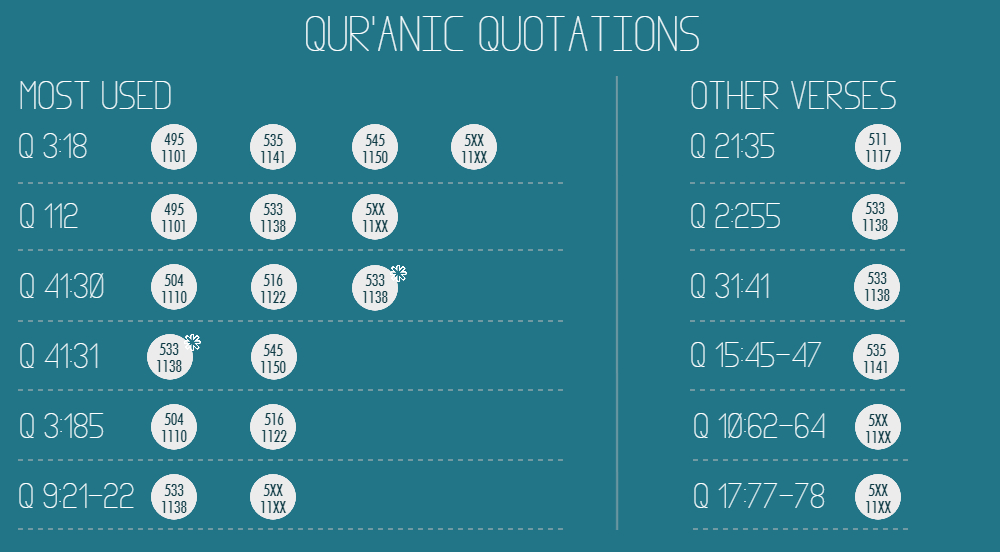 Being pretty much interested in the use of qur’anic quotations in inscriptions, I tried to figure out whether some quotations are more recurrent than others.

Even if it is true that some qur’anic passages are to be found in more cases, none of them seems to be more frequent than the others. This variation of qur’anic quotations can point out that the carvers did not independently choose the content of the inscriptions. We can suppose, for instance, that the patronage (i.e. the family of the deceased) decided which verses were to be inscribed. The carver had to arrange the quotations around the mihrab image. In one case we can see how the quotations were slightly modified to fit the space. In the slab dated 533/1138, the quotation Q 2: 255 is divided: the first part is carved in the outer frame, and the remnant is inscribed in a lower horizontal band which never occurs in the design of the other slabs. In the same slab, Q 112 is inscribed without the initial basmala that always occurs at the beginning of every qur’anic quotation. Also in this case is it probable that the carver omitted it, in order to save space for the qur’anic content.

Why have I done this?

First of all because I like it, then, because sometimes we tend to concentrate on only one object, without considering the whole context. Sometimes links between objects are only superficial: considering a group of related objects is important in a twofold way. On the one hand, when studying a particular object it is useful to understand what was produced in the same period and place,to better recognise the particularity of the object itself, the evolution of the tradition and the place the object has inside that tradition. On the other hand, it helps having a clearer idea of what happened in that period: funerary art is related to the sacral sphere of course, but also to the private dimension. The features of these objects can maybe shed light on the cultural and social context that produced them.

The funerary slabs taken into consideration are: